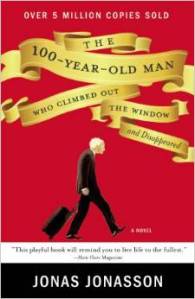 On the first page of this novel, centenarian Allan Karlsson, in an effort to dodge his 100th birthday party, climbs out the window of his nursing home room and heads to the local bus station with no destination in mind.  With neither planning nor malice intended, he hops on the next bus with a suitcase a fellow passenger asked him to watch so he could use the restroom.  The suitcase turns out to be brimming with cash: ill-gotten gains from a crime.  So begins the adventurous and humorous journey with criminals and police all looking for the 100-year-old man.  Along the way, he befriends an outcast recluse that becomes his cohort.  Together they use some of the cash to buy a hot-dog-stand-owner’s Mercedes and hire him as their chauffeur.  Instead of attracting attention at a hotel they pull up to a local country house to offer to pay for a night’s stay.  Their host is a foul-mouthed redheaded widow who owns a dog and an elephant.  Together, this motley crew tries to stay one step ahead of their pursuers.

Just as interesting as the main action is Allan’s backstory.  Turns out he began his career in munitions and became an expert at blowing thing up.  Not only was he a spectator to some of the most important events of the twentieth century, he actually played an influential role in them.  Happenstance puts him in situations where he ends up dining and drinking with world leaders:  Mao, Truman, Stalin, Churchill, Franco, and de Gaulle.  The scene with Vice President Truman is especially funny – Allan and he are making their way through two bottles of Tequila at a Mexican restaurant in Los Alamos, New Mexico, when Truman gets the call that Roosevelt has died – the new leader of the free world is “three sheets to the wind”.

Although the book is not a laugh-out-loud comedy, it is non-stop amusing and entertaining – which is a feat for any author.  The characters are quirky and comical.  Allan gives us all hope that you are never too old to start over and that good vodka and a kind heart are key to a long and interesting life.

The author Jonas Jonasson is Swedish. The book has been translated into 30 languages and has sold over 6 million copies.

Bryan will be reviewing “The 100-Year-Old Man Who Climbed Out the Window and Disappeared” on WZZM Channel 13 Take Five morning show at 9:00 am Monday, November 3.  Please join us for the monthly Book Nook Book Club at 6:00 pm Monday, November 3 at the Book Nook & Java Shop in downtown Montague.  Everyone is welcome.