“H is for Hawk” by Helen Macdonald

Helen Macdonald’s debut novel, H is for Hawk, is a marriage of genres: a natural history, a literary

biography, a memoir, and a chronicle of grief. It also investigates the relationship between people and wild animals and takes a look at the intriguing subculture of falconry which, unbeknownst to me, is still alive and well all over the world.

When Macdonald, a historian and lecturer at Cambridge University, learns of her father’s sudden death (he was a beloved photojournalist), she withdraws from society and dives back into the great pastime and passion of her youth: falconry. This time around, however, it will not be with just any bird – she will train and hunt with the wildest of the wild – a goshawk – a bird she thought of as “things of death and difficulty: spooky, pale-eyed psychopaths that lived and killed in woodland thickets.”

While training her new goshawk named Mabel, Macdonald turns to one of the books that shaped her understanding of the responsibilities and craft of the falconer: The Goshawk by T. H. White, himself an amateur falconer and keeper of goshawks. In T. H. White’s most famous book The Sword in the Stone (the first book in The Once and Future King series), the wizard Merlyn, as tutor, transforms a young Arthur into a small falcon known as the merlin. In the short chapter focusing on Arthur’s adventures among the beasts of prey, he is both frightened and fascinated by the half-mad Colonel Cully, a bloodthirsty, raving goshawk. This scene illuminates some of the conventional wisdom surrounding goshawks. Macdonald quotes one falconry textbook that characterizes goshawks as developing “symptoms of passing madness.” Large, bloodthirsty, impossible to understand or relate to, goshawks are mysterious creatures in Macdonald’s book — and even more so in White’s.

Macdonald’s relationship with Mabel helps her grieve, initially allowing Macdonald to pretend she too is wild and therefore not subject to human emotions. “While the steps were familiar,” Macdonald writes, “the person taking them was not. I was in ruins. Some deep part of me was trying to rebuild itself, and its model was right there on my fist. The hawk was everything I wanted to be: solitary, self-possessed, free from grief and numb to the hurts of human life.” As she comes to spend more time with Mabel, though, she realizes that humans’ experience of loss — and their ability to reflect on it — is far more complicated than that of the hawk, which is really a plain and simple instrument of death. Macdonald aptly sums up bereavement and loss: “It happens to everyone, but you feel it alone.” She grows to discover that she needs more than a raptor counterpart to find herself truly human: “Hands are for other human hands to hold. They should not be reserved exclusively as perches for hawks. And the wild is not a panacea for the human soul; too much in the air can corrode it to nothing.”

Watch Bryan on WZZM Channel 13’s “My West Michigan” morning show at 9:00 a.m. on Monday, April 4. Join The Book Nook’s monthly book club at 6:00 p.m., Monday, April 4 for a discussion of H is for Hawk at the Book Nook & Java Shop in Downtown Montague with refreshments, snacks, beverages, and camaraderie; of course, everyone is welcome, and the Club meets the first Monday monthly all year long. Get 20% off the Book Club’s book selection all month, too. 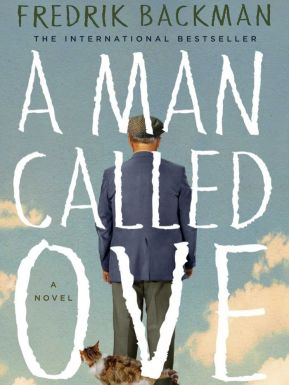 Ove (“oo-vah”) is done with life.  He sick of people – especially neighbors – who just don’t follow rules.  He has staunch principles, strict routines, and a short fuse. During his daily inspections through the neighborhood, he calls attention to the infractions of the parking rules, the trash, and other resident association policies.  The neighbors view him as a cantankerous curmudgeon who spouts off about trivial matters – “the bitter neighbor from hell.”  The opening scene of the book, with Ove’s trying to purchase a computer, humorously shows his ongoing struggle with a modern world into which he has been begrudgingly dragged.  His highest value (besides owning a Saab) is to be of use; but, the modern world seems to have no use for him.  So he is done with life.  He can’t help it:  he’s still alive, but it isn’t for lack of trying.  Each attempt to take his own life fails for some reason or another, mostly interruptions from his new neighbors – a young couple with two young daughters.  Their acquaintance got off to a bad start when, on moving day, the husband backed the U-Haul truck into Ove’s mailbox,and crushed it.   With a sigh, and a complaint about the younger generation, he indignantly backs up the U-Haul for them to show how it’s supposed to be done.

The book follows a classic Rom-Com (Romantic Comedy) formula of a person stuck in life with a fixed behavior and point of view, who is disrupted by another (usually a romantic interest but as with Mary Poppins and Mr. Banks, not always) and in the end is transformed.  In this case, the neighbors (mostly the pushy, pregnant, and extroverted wife Parveneh) see past or ignore Ove’s rigid exterior to view and understand him as useful.  They bring him food and make requests for help – driving lessons, handyman chores, rides to the hospital – and eventually they uncover a hidden heart of gold.  A heart that has been severely broken and which the callous exterior is trying to protect.  The reader, through Ove’s reflections, gets to know the backstory of a handy, hardworking, determined young man falling in love only once and losing that love.  As with any good Rom-Com, it is humorous, heart-warming and life affirming – along with the laughs, there are tears.

Fredrick Backman, the author, is a blogger and columnist from Sweden. He never guessed that his debut novel, A Man Called Ove, would achieve the overwhelming success it has. He started writing it when a character on the blog proved hugely popular. Admittedly a tad grumpy himself at times, he could relate to the woes of a man who finds life sometimes isn’t going quite the way he wants it to. When an editor suggested he warm the character up a bit, Backman was having none of it. His instincts were right.  The book has now been translated into 25 languages.  When asked about creating Ove, Backman says “most people I have ever met are grieving something. Every human being has regrets and shame and sadness in them.”

Watch Bryan on WZZM Channel 13’s “My West Michigan” morning show at 9:00 a.m. on Monday, March 7.  Join The Book Nook’s monthly book club at 6:00 p.m., Monday, Marcy 7 for a discussion of A Man Called Ove at the Book Nook & Java Shop in Downtown Montague with refreshments, snacks, beverages, and camaraderie; of course, everyone is welcome, and the Club meets the first Monday monthly all year long.  Get 20% off the Book Club’s book selection all month, too.