The Book of Wonders by Douglas Trevor is about questions, and about what keeps our stories going, our myths and dreams…

It is a book that asks if the wonder and mystery is more important than the truths we find, age old questions to be sure, maybe even unanswerable, but important we ask none the less. It is about people trying to coexist with other people, and all of the complexities that entails.

The Book of wonders (2017 published by six on seven books) has numerous meta-narratives working below the surface of the fictional character’s existence, bringing the object known as the book and the ideas of our own reality into play. One is about literary mediums, and one person might ask…

Why in the age of twitter and social media, a time where everyone wants everything right now, with a society that seems to have an attention span that lasts no longer than five minutes, why, is the short story not more popular than the novel?

The characters in The Novelist & The Short Story Writer are ying and yang. The story itself is a contrasting thought experiment where two different writers are shown in juxtaposition to one another, colliding at a summer conference where the novelist is held in such high regards, while the short story writer is seen as a weirdo who unfortunately writes badly. Somehow, the short story writer has mistakenly been invited to lecture, and as the summer days go by he becomes an outcast, while talking about his experimental writing and asking the novelist if she’ll do whatever it takes to be able to write the story she needs to write, even if that means lighting herself on fire. It is a comedic but lonely piece of writing that ends abruptly…after the novelist meets the short story writer’s family, who lives in Ohio in a lower middle-class neighborhood.

The novelist brings the short story writer’s notebook he forgot on campus to him, they talk for a while, but that’s it, they part ways; the short story writer goes inside of his house to calm down his autistic child before he types his stories at the kitchen table when his family goes to bed.

She (the novelist) gets back on the highway, home to New York, seemingly happy that her life isn’t the short story writer’s life, making the reader wonder if either of them understood anything that happened to them. Were any lessons learned? But—so goes life, and often enough we don’t take the time to comprehend what is going on in the moment, a major theme in—The Book of wonders, and this is just one of the stories, but all have a different existential impact on the reader.

Trevor (who’s tight prose is a perfect fit for the literary short story genre) writes about humanity, and about the relationships we have with each other. Mothers and daughters, brothers and colleagues, all interactions of human nature are on display. The short story collection could be said to be about…what happens after…

The Book of Wonders. It is a great book, I’d say, about simply, existing.

Douglas Trevor is the author of the novel Girls I Know (SixOneSeven Books, 2013), and the short story collection The Thin Tear in the Fabric of Space (University of Iowa Press, 2005). Thin Tear won the 2005 Iowa Short Fiction Award and was a finalist for the 2006 Hemingway Foundation/PEN Award for First Fiction. Girls I Know won the 2013 Balcones Fiction Prize. Doug’s short fiction has appeared most recently as a Ploughshares Solo, and in The Iowa Review, New Letters, and the Michigan Quarterly Review. He has also had stories in The Paris Review, Glimmer Train, Epoch, Black Warrior Review, The New England Review, and about a dozen other literary magazines. Doug lives in Ann Arbor, where he is the current Director of the Helen Zell Writers’ Program, and a Professor of Renaissance Literature in the English Department at the University of Michigan.

“The Yellow Eyes of Crocodiles” by Katherine Pancol 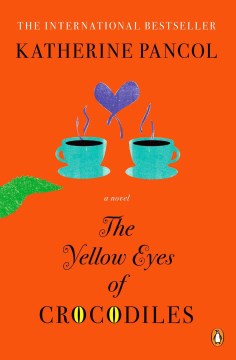 Katherine Pancol’s novel, a runaway bestseller in France, has been translated into more than 2 dozen languages.  It’s a predictable Cinderella plot line that is wrought with lively characters and humorous predicaments.  Dowdy, middle-aged Josephine hits bottom when her chronically unemployed husband runs off with his mistress (and manicurist) to start a crocodile farm in Kenya.  He’s certain that this is finally the get-rich-quick scheme that is going to pay off.  He is so confident that he drains their savings to invest in the project.  Josephine is left alone to support their two teenage daughters on her measly wage as a 12th-century French research scholar.  To make matters worse, her oldest daughter Hortense blames Josephine for her husband’s behavior – she is much too frumpy and dull to keep a man interested.  Meanwhile, Josephine’s sister Iris has everything: beauty, a rich husband, a swanky apartment in Paris, and a glittering social life.  But, Iris is bored by it all.  At a cocktail party she strikes up a conversation with a publisher – to make herself seem more interesting, she tells him she is working on a novel.  He agrees to read the manuscript when ready.  It is then that Iris hatches the brilliant idea of having Josephine write the book (a romance that takes place in 12th-century France).  Josephine keeps the money, and Iris gets the credit and attention.  The book is an overwhelming, overnight success.  Josephine becomes rich, and Iris gets fame.  Josephine, buoyed by her achievement, comes into her own:  she loses weight, gets highlights, fights inner demons from her past, and even finds a handsome lover in the library.

Although this is a satisfying Cinderella story, the theme is the age-old moral:  money, fame, and wealth are shallow pursuits, and you can lose your soul by pursuing them for their own sake.  Crocodiles are used as a metaphor for this – one can be eaten alive by chasing the gold of the crocodile’s yellow eyes.

Katherine Pancol has gone on to write two sequels to the novel:  The Slow Waltz of Turtles and The Squirrels of Central Park are Sad on Mondays (not yet translated to English).  The Yellow Eyes of Crocodiles has been made into a movie – in French.

Watch Bryan on WZZM Channel 13’s “My West Michigan” morning show at 9:00 a.m. on Thursday, January 4.  Join The Book Nook’s monthly book club at 6:00 p.m., Wednesday, January 3 to discuss The Yellow Eyes of Crocodiles at the Book Nook & Java Shop in Downtown Montague with refreshments, snacks, beverages, and camaraderie; of course, everyone is welcome. The Club meets monthly all year long.  Get 20% off the Book Club’s book selection all month, too.