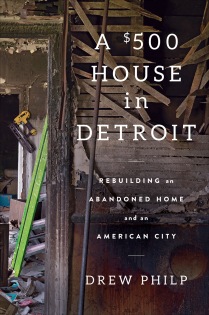 On the surface, this is a story of a young, idealistic college kid from the University of Michigan wanting to use his studies and hard work to make a difference in the town that needed the biggest difference made: Detroit.  He moved with no money, no job, and no friends to an apartment in the red-light district and on notorious murder row.  His apartment neighbors were crack dealers, prostitutes, and drug addicts.  And although he was out of his element, something about the place made him feel connected – much more so than in affluent Ann Arbor, where he was finishing his degree.  Commuting back and forth between Detroit and Ann Arbor his last year of college, Philp describes as economic jet lag – yo-yoing back and forth between extreme ends of race and economic divide only 40 miles apart.  His first job was as the white-face front to an all-black construction company.  The company shamelessly used his white voice and white face to bid the more lucrative jobs in the suburbs.

At 23, he bought a monstrous shamble of a house on auction for $500 – a big 2-story Queen Anne with a wraparound porch and a yard for a garden.  It needed a new everything: porch, roof, walls, floors, plumbing, electricity, heating, the works.  It was stripped and full of trash.  He says, “I wanted a house nobody wanted, a house that was impossible.  The city was filled with these structures.  It would be only one house out of thousands, but I wanted to prove it could be done, that this American torment could be built back into a home.  Fixing it would be a protest of sorts.”  It will take muscle, defiance, ruthlessness, and community to fix this thing.  And poetically, it will take the same ingredients to rebuild the city.

There were so many points in the story that less adventurous mortals like me were begging him to throw in the towel:  spending a Detroit winter in a creaky, drafty house with no heat; learning the foundation needed to be lifted; shoveling out 2 stories of trash piles as high as his chest; trying to sleep with gunshots outside the house; the basement flooding.  This was not an easy life.  Why are you doing this?

Philps began to realize “Detroit was just America with the volume turned all the way up, that what was about to happen would have repercussions for the rest of the Western world.  Detroit was the most interesting city on the planet, because when you scratched the surface you found only a mirror.”  The big struggles America faces: racism, economic disparity, education, drugs, crime, hopelessness, were the same in Detroit, but on steroids.  And how a powerhouse of a model city in its heyday can within a matter of decades be the open wound of the country is one of the most telling stories of American history.

What Philps learned from those eight years was that “there were still 700,000 people living in Detroit, with their own ideas about what it should become. There was a community already here, not a grotesque one that needed changing as I had been told, but a powerful and innovative one I wanted to assimilate into.”

Nowadays you hear about the hip vibe coming from Detroit – the renewal and renaissance.  Philps gives a cautionary warning about repeating errors from the past.  While 80 percent of Detroit is black, 70 percent of those leading the regeneration are white.  Developers have been sweeping in and bidding on properties against black families occupying the houses.  Philps and a friend successfully outbid a developer from ousting a neighbor.  City and state funds are funneled not to the diehard citizens of Detroit that lived through the crises but to the likes of billionaire Mike Illitch to build a new hockey arena.  Starting fifteen years ago, one-third of Detroit homes have been foreclosed, the homeowners evicted.  In 2014 over 100,000, one seventh of the city, had their water shut off.  This is the dark underbelly of the “renaissance”.

A $500 House in Detroit was selected as the 2018 One Book, One Community read for the White Lake Area.  Join us for a community book discussion at the Book Nook & Java Shop at 6 p.m. Wednesday, November 7.  A community potluck will be held at 5 p.m. at Lebanon Lutheran Church in Whitehall on November 11. Drew Philp will attend the potluck, and at 7 p.m. he will talk about and sign his book and some of the impact it has had since being published a year ago.